When Vaccines and Re-emergence Were Just as Daunting

CINCINNATI (AP) — The COVID-19 pandemic and the distribution of the vaccines that will prevent it have surfaced haunting memories for Americans who lived through an earlier time when the country was swept by a virus that, for so long, appeared to have no cure or way to prevent it.

They were children then. They had friends or classmates who became wheelchair-bound or dragged legs with braces. Some went to hospitals to use iron lungs they needed to breathe. Some never came home.

Now they are older adults. Again, they find themselves in what has been one of the hardest-hit age groups, just as they were as children in the polio era.

They are sharing their memories with today’s younger people as a lesson of hope for the emergence from COVID-19.

Clyde Wigness, a retired University of Vermont professor active in a mentoring program, recently told 13-year-old Ferris Giroux about the history of polio during their weekly Zoom call. Families and schools saved coins to contribute to the “March of Dimes” to fund anti-polio efforts, he recalled, and the nation celebrated successful vaccine tests.

“As soon as the vaccine came out, everybody jumped on it and got it right away,” recounts Wigness, 84, a native of Harlan, Iowa. “Everybody got on the bandwagon, and basically it was eradicated in the United States.”

In the late 1940s and early 1950s, before vaccines were available, polio outbreaks caused more than 15,000 cases of paralysis each year, with U.S. deaths peaking at 3,145 in 1952. Outbreaks led to quarantines and travel restrictions. Soon after vaccines became widely available, American cases and death tolls plummeted to hundreds a year, then dozens in the 1960s. In 1979, polio was eradicated in the United States. 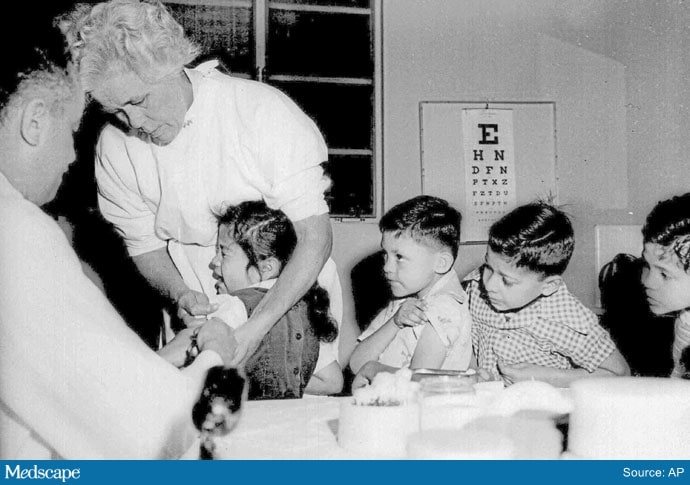 In this April 1955 photo, first and second-graders at St. Vibiana’s school in Los Angeles are inoculated against polio with the Salk vaccine.

“So really, what I would love for people to be reassured about is that there have been lots of times in history when things haven’t gone the way we’ve expected them to,” says Joaniko Kochi, director of Adelphi University’s Institute for Parenting. “We adapt, and our children will have skills and strengths and resiliencies that we didn’t have.”

While today’s children learned to stay at home and attend school remotely, wear masks when they went anywhere and frequently use hand sanitizer, many of their grandparents remember childhood summers dominated by concern about the airborne virus, which was also spread through feces. Some parents banned their kids from public swimming pools and neighborhood playgrounds and avoided large gatherings.

“Polio was something my parents were very scared of,” says Ohio Gov. Mike DeWine, now 74. “My dad was a big baseball fan, but very careful not to take me into big crowds…my Dad’s friend thought his son caught it at a Cardinals game.”

A 1955 newspaper photo surfaced recently showing DeWine becoming one of the first second-graders in Yellow Springs, Ohio, to get a vaccination shot. His future wife, Fran Struewing, was a classmate who got hers that day, too. Sixty-six years later, they got the COVID-19 vaccination shots together.

DeWine, a Republican, has drawn criticism  within the state and his own party for his aggressive response to the COVID-19 outbreak. But he and Senate Minority Leader Mitch McConnell, a Kentucky Republican who overcame a childhood case of polio, and others of that time remember the importance of developing vaccines and of widespread inoculations.

Martha Wilson, now 88 and a student nurse at Indiana University in the early 1950s, remembers the nationwide relief when a polio vaccine was developed after years of work. She thinks some people today don’t appreciate “how rapidly they got a vaccine for COVID.” She doesn’t take for granted returning to the kind of safer life that allows for planning a big family reunion around Labor Day.

Kochi had a different experience than most children of the 1950s. Her mother, a believer in natural medicine such as herbal treatments, didn’t have her vaccinated (Kochi got vaccinated as an adult). While her mother was an outlier then, she would fit in with today’s vaccine skeptics.

DeWine thinks a key contrast between the 1960s and today, with its reluctance of so many Americans to get vaccinated, is that polio tended to afflict children and had become many parents’ worst nightmare.

“I know our parents were relieved when we were finally going to get a shot,” Fran DeWine recalls.

Her husband recently initiated a series of $1 million lotteries to pump up sluggish COVID-19 vaccination participation among Ohioans. President Joe Biden last week announced a “month of action” with incentives such as free beer and sports tickets to drive U.S. vaccinations.

Wigness blames today’s divisive politics and anti-science messages spread over talk shows and social media. Ferris, the teen he mentors, says he sees criticism of mask-wearing and other precaution among some of his peers.

Ferris says the polio eradication success “certainly means it’s possible we can beat COVID, but it entirely depends on people.”

Martha Wilson, now living in Hot Springs Village, Arkansas, talked about polio and COVID-19 in a recent Zoom call with her granddaughter, Hanna Wilson, 28, of suburban New York. She reflected on treating patients iron lungs, a kind of ventilator used to treat polio.

“They were very confining..It was not a very nice life,” says Wilson.

“I remember a book I read when I was a little kid, ‘Small Steps: The Year I Got Polio,’ by Peg Kehret. And it stuck with me,” Hanna says. “And I remember the iron lungs and things like that. But when I asked people about it — ‘Hey, do you remember what polio was?’ — no one knew.”

Hanna, an athletics administrator for the Big East Conference, happened to be in Iran in December 2019 when she heard the first reports of a new virus in China. She was visiting a grandfather, Aboulfath Rohani, who would die there a few months later at age 97.

Back home, her job was quickly transformed. Games, then tournaments, then entire seasons were canceled.

“It’s been eye-opening,” she says. “So many people denied that it was real, they hadn’t seen anything like this.”

Both she and her grandmother point out that the nation endured not only polio but a deadly flu pandemic in 1918 whose estimated toll remains higher than COVID-19’s both in the United States and globally.

“I’m hopeful we will come out of this and it will be just another chapter in history,” Hanna Wilson says.

Martha Wilson says her mother-in-law survived illness from the 1918 flu pandemic and lived a long life.

“So that was one generation, polio was another generation, COVID’s another,” she says. “I think they happened so far apart that we’d forgotten that these things do happen. I think COVID caught us by surprise.

“And now Hanna and her generation will be maybe more aware when something else comes along.”

Community Practices Still Not Testing Half of NSCLC Cases

How the Media Handled, and Got Handled, by COVID

The ‘Iceberg’ of Sexual Harassment: What’s Below the Surface

We will be happy to hear your thoughts

weifengrating.com participates in the Amazon Services LLC Associates Program, which is an affiliate advertising program designed to provide a means for websites to earn advertising fees by advertising and linking to amazon.com