Narjust Duma, MD, seemingly had it made as a young doctor. She had matched at the prestigious Mayo Clinic in Rochester, Minnesota, for an oncology fellowship ― a highly promising start. 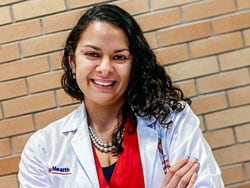 But after she arrived, there was an overwhelming problem: she was physically depleted and mentally ill.

The crisis was not the result of the preceding years of residency ― a grind of long hours, cafeteria food, and learning the ins and outs of doctoring in hectic settings.

Instead, Duma was caught in a debilitating bind. Starting as a resident in New Jersey, she had adopted a false identity. And it had finally ― and fully ― caught up with her.

“I had used all my energy trying to be someone I was not,” she said.

Her alienation as a physician was profound. “After 2 years on antidepressants, my white coat still felt like it didn’t fit. It felt like a costume that was put on every day ― just to fulfill the dream of being a doctor,” she commented.

Duma, who came to the United States from Venezuela, said that she had lost herself. “My identity was tested during medical training ― I struggled to fit in,” she said.

It “started small,” with off-putting comments from other residents, like, “Look at her red shoes,” and, “Oh you are so Latina,” Duma explained. The comments accumulated, and she took them to heart and set out to change herself.

Duma recounted her experience at ASCO Voices, a regular storytelling event held during the annual meeting of the American Society of Clinical Oncology, which was held virtually this past weekend.

In her talk, the Venezuelan immigrant described how she managed to regain her abandoned self and how an epiphany about a yellow dress resulted in her now helping other doctors who may be struggling.

Her tale struck a chord with listeners. Ophira Ginsburg, MD, of NYU Langone’s Perlmutter Cancer Center, in New York City, was effusive on Twitter after Duma’s presentation, calling it “eloquent, heartbreaking, uplifting ― and all in 8 minutes.”

One audience member suggested Duma’s discomfort with herself represented a common struggle for many ― for self-worth. Janice Mehnert, MD, also from NYU Langone, tweeted: “How many relate when she speaks of the overwhelming feeling of needing to be someone you are not to be taken seriously as a professional? Literally, she brought me to tears and reminded me of my own journey.”

Balazs Halmos, MD, of Montefiore Health Systems, New York City, posted a note in the presentation’s chat box: “As an immigrant myself I wish there were passionate charismatic (and very funny) leaders like Dr Duma at the time I was training to make our experience of integration easier.”

Lidia Schapira, MD, of Stanford University, in Stanford, California, responded to Halmos, saying that she too is an immigrant and that Duma’s candor about not fitting in was a relatively new thing: “Balazs, that was not ‘talkaboutable’ just a decade ago.”

Thus, Duma’s story raises questions about how the United States, which substantially depends of foreign-born physician trainees to fill out its medical workforce, supports and encourages such essential workers.

Before becoming a doctor, Duma knew that a career in medicine required commitment, long hours, and sacrifice. Growing up in Venezuela, she witnessed her parents, who are both doctors, exhibit those qualities. “I have spent a good amount of time waiting for my father to be done in the ER or for my mother to see that one last patient,” she explained.

Like some other top students in foreign countries who are fluent in English, Duma applied for medical residency in the United States. She eventually settled in at Rutgers New Jersey Medical School, in Newark, New Jersey.

That’s when things started to go awry for Duma.

Comments about her colorful style and personality continued, and she took them personally. Then she found a new exemplar ― another resident, Valerie, from Connecticut.

But as she morphed into a wannabe Connecticut Yankee, the Venezuelan withdrew into herself: “I kept pieces of my personality hidden, just with the hope that I could get the respect of my colleagues.”

She also fell into a routine: every day after work, Duma drove home, got in the shower, and started crying, only to stop to go to bed. She dropped into depression and eventually began taking antidepressants.

Duma sought help in New Jersey from senior residents and attending physicians and was told, among other things, to “man up.” A few of her mentors also suggested “that I should change my personality,” she added.

Again, Duma took the comments to heart. “I tried hard, every day, to be someone else,” she revealed.

Duma did a good job of it.

First, while on rotation, she looked for and found a specialty that “would make me feel like I belonged” ― oncology. And then she matched with her top oncology program choice ― Mayo.

“This success lead me to believe that not being myself was the right thing to do,” Duma said.

As her time in New Jersey wound down and a move to the Midwest approached, Duma had a realization that would foreshadow her eventual change of heart and mind. The young woman from an expressive, color-splashed South American culture observed one day how “the different colors in my closet changed ― to grey, blue and black because that was more professional.”

Once in Minnesota, Duma started to feel “in my element especially with my patients,” despite her having “a different skin color and an accent.” But she still felt isolated outside the clinic. Her depression was ongoing, and she still wanted to be like Valerie.

In addition, her vitality, which had enabled her to win awards and present research despite her mental health struggles, was waning.

One morning in the middle of fellowship, she had an epiphany.

“I was exhausted and depressed,” she confessed. “I realized it was time to be myself: Narjust from Venezuela. I put on a yellow dress that I hadn’t worn in years and finally felt comfortable being my true self.

“I realized my calling was to support others in situations similar to mine,” she recounted. Soon after, in collaboration with two friends, she founded the Twitter-based group, #LatinasinMedicine, an international Twitter community for healthcare professionals that now has 6.6K members/followers.

In addition, she put together an online research group called the #DumaLab, which focuses on discrimination in medical education, gender equity and bias in medicine, and cancer health disparity. The majority of members are women of color.

Duma’s next career step was to join the Carbone Cancer Center at the University of Wisconsin, in Madison, where she specializes in lung cancer, especially among women. In the next few weeks, she will be moving to Boston to become associate director of the Cancer Care Equity Program and assistant professor of medicine at the Dana-Farber Cancer Institute and Harvard Medical School.

More Than a Quarter of US Doctors Are Foreign Born

Duma is one of thousands of foreign-born physicians who work in the United States. Immigrants accounted for 28% of the 958,000 physicians and surgeons practicing here, according to a 2020 report from the Migration Policy Institute. That’s a higher figure than immigrants in the general workforce, where they account for 17% of US workers.

“The American health care system relies very heavily on individuals who were born in other countries,” summarized Anupam Jena, MD, of Harvard Medical School and Massachusetts General Hospital, in Boston, in a 2018 Reuters story about a study on the subject.

Thus, Hispanics are underrepresented as doctors in relation to the general population, where they constitute 18.5% of all people in the United States, according to current data from the US Census Bureau.

Duma wants to effect change in this arena. “The face of medicine is changing, and we’re here to demonstrate the strength of our experiences. We’re here to fuel the change that medical education needs. I was finally free the moment I realized that I cannot be anyone else but myself ― a proud Latina in medicine and oncology,” Duma said.

She has a message for all minority fellows, residents, and medical students: “You belong in medicine, even in those moments in which your identity is tested. You are in the right place and you are beautiful the way you are. And remember that someone is looking at you and you are a role model for someone.”

Nick Mulcahy is an award-winning senior journalist for Medscape whose work focuses on oncology. He can be reached at nmulcahy@medscape.net and on Twitter:’@MulcahyNick.

ARNI Does Not Best Valsartan in Advanced Heart Failure

Patients With RA on Rituximab at Risk for Worse COVID Outcomes

We will be happy to hear your thoughts

weifengrating.com participates in the Amazon Services LLC Associates Program, which is an affiliate advertising program designed to provide a means for websites to earn advertising fees by advertising and linking to amazon.com